You can see the video here: http://www.gateserver.com.br/BDBug.mp4

Staff member
This looks like it is related to this: 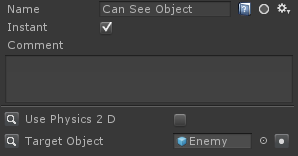 As you are creating your tree it is common practice to reference objects within the scene from a Shared Variable or task. For example, in . . .

I don't think so Justin, it seems to be a serialization issue, since it happens only when I transform my GameObject into a prefab.

Staff member
Based on your video that is what it looks like it is. You are assigning a scene GameObject to a prefab which isn't allowed because prefabs exist at the project level rather than the scene level.
B

Sorry Jeff, but you did not understand the issue, I think I was not clear enough. I will try to make a new video later and try to explain better what is the problem.